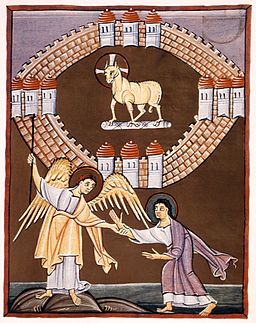 For the last two Sundays of the series on Revelation, we cover a lot of ground, getting all of the way to the New Jerusalem on September 3rd. The first reading starts where last week’s reading left off. The Lamb was found worthy to open the scroll with seven seals, and now we see what happens when four of the seven seals were opened.

In the image-rich language of Revelation, the first four seals release what are known popularly as the Four Horsemen of the Apocalypse, each symbolizing a different manner of violence, injustice, or suffering. The first horseman represents conquest and oppression, the second violence, the third scarcity of resources, and the fourth death personified.

Now, if you look at Revelation as a letter to seven churches in the first century, who were undergoing suffering, then you will notice that oppression, violence, economic insecurity, and death were already plaguing the original audience. These are not things only for the future, but the reality we experience even today. Perhaps instead of looking at this as a scary vision of the future, we should recognize that this is a depressing, but realistic depiction of life on earth. It reminds me of Habakkuk 1:1-4, where the prophet is complaining about the apparent victory of violence and injustice. By the end of that book, the prophet is able to exult in the LORD, “For there is still a vision for the appointed time; it speaks of the end, and does not lie. If it seems to tarry, wait for it; it will surely come, it will not delay” (Habakkuk 2:3). Injustice and violence may seem to reign now, but God is the true king, and God has promised an end to suffering.

So, in your faith formation setting, deconstruct the popular interpretation of Revelation 6 and ask participants to identify where in the world today they see these four “horsemen” at work?

Juxtaposed to this scene is a return to the heavenly throne room, where the Lamb sits on the throne and the will of God is done perfectly. Now to the heavenly chorus we see added the faithful, who have experienced the suffering of this world and been redeemed by the Lamb. We hear the promise of God’s kingdom declared to them, that the suffering will come to an end and God’s shalom will rule forever. Chapter 7 then ends with a tender and amazing image of God, the creator of the entire universe, lovingly wiping the tears of suffering and sadness from their eyes. Even in the midst of these cosmic events, God cares about the tears of those individuals who suffer.

This vision in Revelation 7 pictures a world in which God’s will is done. Take time to imagine with the other participants what the world would be like if all of the suffering is taken away, replaced by the peace of God.

On Sunday, September 3rd, we move to the end of our series on Revelation and reach the end of these visions. These descriptions in chapters 21 and 22 are easily the most popular parts of the book, and are powerful images of hope. The sad state of affairs that exists now is not eternal. Suffering will come to an end. God the Creator is also the God of the New Creation. The gulf that now exists between how things are on earth and God’s kingdom “as it is in heaven” will be overcome. Going even further than the vision in Revelation 7, God will not only wipe away every tear, but “Death will be no more; mourning and crying and pain will be no more, for the first things have passed away” (Revelation 21:4).

This vision of hope is not only for the future, but it is designed to inspire us now. God’s will is to end suffering. What should we do as we slog through this life filled with violence, injustice, and death? We should stand firm in the promises of our God and do the work God has laid out for us, to spread God’s kingdom of love and justice everywhere we can, eliminating as much suffering as we are able to do, empowered by the Holy Spirit.

Finish off this series in Revelation with exuberant worship, filled with the hope that God is truly king. And, then search with your participants on where God is active in the world, bringing peace and love, and an end to suffering. Where can you join God’s work?