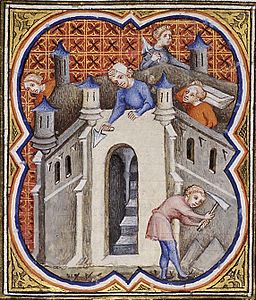 We move now to the third story in our series of Narrative Lectionary readings “Called by God.” On October 15th we heard God calling in the night to the boy Samuel. Then, on October 22nd we looked beyond the outward appearance as God called David to be king. To get to our story today, we fly over the stories of David growing up, first in King Saul’s favor and then running from his wrath. David became king and routed his enemies on all sides, though making horrible decisions at times (see Bathsheba and Uriah). David’s exploits and family turmoil covers much of the book of 2 Samuel. David chose Solomon over his other sons to be king after him. King Solomon prayed to God for wisdom and was richly blessed. Now he has embarked on the project that his father wanted to do, but was prevented. God had prevented David, but had promised that his son would build the temple.

This week, Solomon orders for a great and glorious temple to be built for the LORD, to replace the tabernacle the people of Israel had carried around the wilderness for so many years. This new building was dedicated, and the priests carried into the Holy of Holies the ark of the covenant, the most sacred object of the Israelites. The presence of God was confirmed as the temple was filled with a cloud of God’s glory.

Solomon is clear further in chapter 8 that he knows that no building can box in the glory of God:

But will God indeed dwell on the earth? Even heaven and the highest heaven cannot contain you, much less this house that I have built! (1 Kings 8:27)

Before we begin on that, please take time with your participants to clearly define the differences between the temple and Christian churches. There are similarities, but there are distinct differences. The temple was the singular place on earth where God’s name dwelled, where God promised to be present. It was the center of worship via animal sacrifice. Parts of it also, at least by the first century CE, served as a financial center. As one moved inward into the temple, there were increasing regulations on who was allowed in, such that in the Holy of Holies, only the high priest could enter one day a year. Christians now believe that the presence of God is within all of the baptized in the person of the Holy Spirit. We have direct access to God; animal sacrifice is no more. Churches are buildings where the assembly of believers gather to worship and learn about God.

How can you approach this text for your own faith formation context?

May God bless you this week!

This week’s FREE resource is an intergenerational “Into the Story” activity from our Living the Word: Cross+Generational Education product called “Building a Holy Place,” where participants create a model worship space in groups. This activity can be adapted for use with young kids and adults, or (even better) all the generations together in a classroom or even in the worship service! The Living the Word: Cross+Generational Education curriculum provides weekly lessons following the Narrative Lectionary that encourages the different generations to teach and learn from each other in a classroom or other flexible educational setting.

Be sure to download our free Narrative Lectionary Planning Tool and Scope & Sequence to help in your preparation!